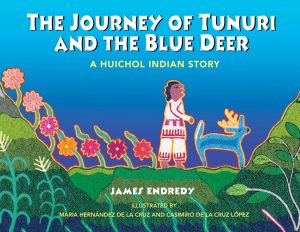 The Journey of Tunuri and the Blue Deer: A Huichol Indian Story

• Shares the hidden treasures of a nature-based indigenous culture

The Huichol Indians live in the remote regions of the Sierra Madre Mountains of western Mexico, where geographic isolation has allowed them to retain their culture and spiritual traditions in the face of colonization. Their nature-based way of life makes no distinction between the sacred and the secular, and they express their reverence for the powers of the earth by regarding all elements in nature as family.

The Journey of Tunuri and the Blue Deer is a modern adaptation of a traditional Huichol story depicting a young child finding his (or her) personal task in life by connecting with the powers of nature. The story is told through the experiences of young Tunuri, who becomes lost in the woods. He meets the magical Blue Deer–a messenger between the worlds of mortals and deities–who introduces Tunuri to Father Sun, Mother Earth, and others in the natural world, while leading him back to his human family. Through this lovely tale and the vivid illustrations done in the medium of traditional Huichol yarn drawings, children can learn about their place in the sacred web of life.

“A creative extension of the oral tradition of Huichol culture.” ― Spirit of Change, May/June 2004

“Simply but eloquently tells the story of how nature and human lives are connected.” ― Troy-Michelle Reinhardt, ForeWord, 2004, Vol.7 No3

“. . . marvelously illustrated with colorful yarn pictures by Maria Hernandez de la Cruz and Casimiro de la Cruz Lopez, and includes information about the Huichol people, their sacred symbols and their art. Ages 6-9 (and to be enjoyed at any age).” ― Light of Consciousness, Winter 2004